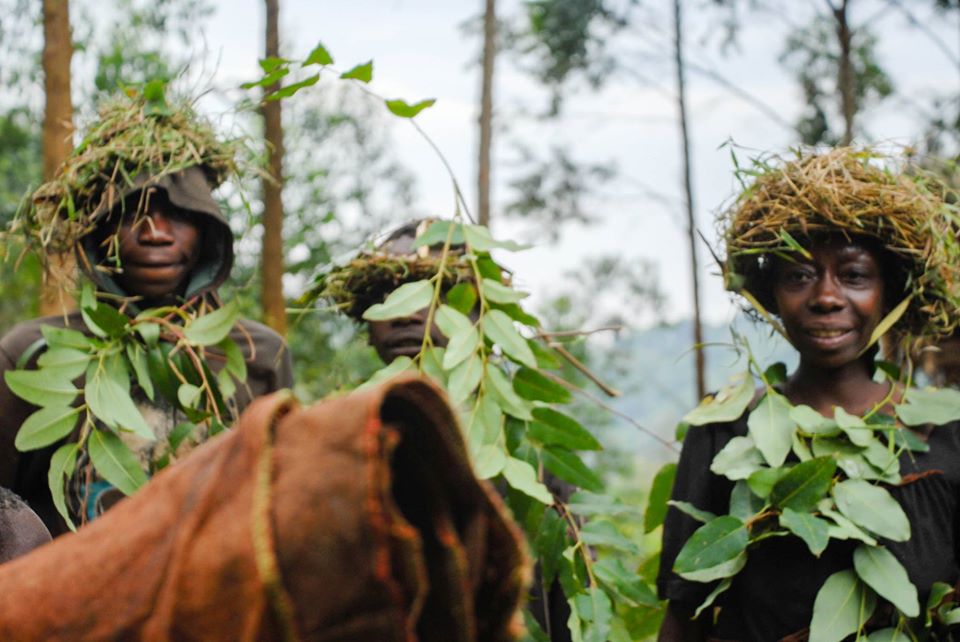 Batwa is a small community of native people in Ruhijja; who have for centuries lived in the forest. They are referred to as Pygmies due to their short height differences. Bwindi Impenetrable Forest in Uganda is considered to be the origin of this indigenous group of people. Being the original dwellers of this ancient jungle, the Batwa won a name “The Keepers of the Forest” generated by the locals in Ruhijja, living around Bwindi impenetrable forest.

The Batwa survived by hunting small game using arrows, spears, nets and gathering fresh plants and fruit in the forest. They lived in grass thatched huts constructed of leaves and branches and moved frequently in search of fresh supplies of food. The Batwa lived in harmony with the forest and its creatures, including the mountain gorillas, for millennia. Some Anthropologists estimate that pygmy tribes such as the Batwa have existed in the equatorial forests of Africa for 60,000 years or more.

The Batwa were well known for not being social people, they never interacted or socialized with the locals that lived around the forest. Since they lived in a furious environment among wild animals, the Batwa people were hash and loved fighting as a way to resolve conflicts amongst themselves. They battled till one party bled ceased to breathe (died) otherwise they would continue after which the still standing person would be declared the winner of the battle.

Due to height differences, the Batwa never married out of their clans, the men and women rose to an average of four feet or less in height, the tallest man among the Batwa would be the shortest among the neighboring community and it was at an average age of 15 years where girls were married off and the boys at the age of 14 years.

The Batwa had a unique way of construction inherited by their ancestral architects. Besides one hut shelter constructed for a family accommodation, every family still ensured to possess a small shelter situated on top of a tree made out of branches and leaves where they kept the baby when the father or mother went hunting or gathering fruits, this flat-like kind of shelter was regarded to be a tower of protection to the baby in case there were any attacks from the animals or any kind of danger, at this situation the mother or father would run fast, climb the tower and secure his/her life alongside the baby’s. However on addition, the tower acted as spot where the king or head of the family/clan would sit and communicate to his people in case he wanted to pass on information to his people.

They used dry sticks from different tree branches to make fire and this they achieved by rubbing the sticks together causing friction which could light up the flames. This practice has been in existence for a long period of time among the Batwa.

In 1992, the Batwa tribe experienced an unusual circumstance which transformed their normal way of life. The government of Uganda evacuated most of them from the forest lands with no compensation as they held no land titles. This exposed them to a new society that was difficult to cope up since they were used to adopted to living in the forests. The surrounding community locals did a lot on reaching out to the Batwa’s fate, they gave them free land where they could occupy and cultivate, they taught them various subsistence skills from which they would earn a living.

The Batwa took long to adopt to this new way of cultivation, however this did not stop the locals from being a help to them, they oftenly provided them with water, food, tobacco, meat, fruits, roots and other necessities of life.

In 2002 the Ugandan government carried out a census around Bwindi Impenetrable Forest and found out that the population of the Batwa was 156, 11years down the road in 2013, the number reduced to 70 people according to a report that was also screened on National television on 4th march 2013 www.ntvuganda.co.ug.

The reduction in their numbers was as a result of the HIV/AIDS epidemic that has almost led to the extinct of this minority group. It is said that the surrounding HIV positive locals spread this deadly virus to the Batwa as it was believed that any HIV positive patient once had sexual intercourse with a Mutwa would be healed instantly.

Beneficially, the Batwa have contributed to the development of the areas where they live in today. This has been achieved through various sectors among which include Tourism. The tourism sector has availed an opportunity to all categories of tourists to visit this indigenous group of people and by doing this, the proceedings from it are directed towards developing the Batwa communities.

However much the efforts from the tourism sector as well government, the Batwa are still facing lots of challenges among which include; poor education, lack of better infrastructure, HIV/AIDS pandemic, poor health conditions (shortage of drugs), poverty, less food etc.

Love Uganda Foundation in relation to its vision “To Empower Africa’s Next Generation” therefore takes up this privilege to go empower the Batwa community on the dates 22nd-25th September 2016. Among our stated objectives of this mission, is to reachout to the Batwa with basic life supplies and conduct various educational and sensitization workshops with this humble community.

“Empowering this community” is our target for “RUHIJJA CHARITY ACTIVITY”.

Join us today on this campaign by contributing towards its success or being part of it, with as low as 2 dollars you could make a whole load of change in the lives of each of these great people.

Donate today, and watch a tremendous transformation in the Ruhijja-Batwa community.