A project directed towards giving OVCs a brighter future.

Vulnerable and Orphan children under this project are those who have lost one or both of their parents, live with relatives, or are facing financial difficulties, especially having difficulties in accessing Education.

Love Uganda Foundation’s top priority under this project is to see that these Orphans and Vulnerable Children (OVCs) get back to school and ensure they stay in school.

Be part of this cause today and contribute towards giving a brighter future to Orphans and Vulnerable Children in Uganda. We can do this if we join hands. 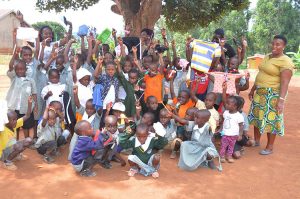 According to the United Nations Children’s Fund (UNICEF), Children below the age of 15 account for 11 per cent of the 1.6 million Ugandans living with HIV (2013 estimates). The numbers are believed to have increased or dropped by less figures in 2023. In a 2015 Situation Analysis of Children in Uganda report produced by the Ugandan Ministry of Gender, Labor and Social Development, household survey data was used to estimate the number of vulnerable children in all four major regions of Uganda.

Be an education Sponsor for one of our Orphans and Vulnerable Children.