Missions are apart of our holistic approaches to reach out to the great need of most of the vulnerable people of Uganda; these include orphans and widows in the furthest of the remote areas of the country. Our mission statement emphasizes looking after widows, the sick, the orphans and the elderly in our hurting communities. Gulu district is one region in Uganda of late is affected by shortage of water, HIV/AIDS pandemic, high rates of school dropouts by young girls due to early child pregnancies, poverty and domestic violence. Serious negative effects upon victims of the recent massive killings and destruction by the Lord Resistance Guerilla War Insurgence. To achieve this, Love Uganda Foundation through our Missions program came up with a clear strategy of establishing a Care Project in Gulu district. This is aimed at rehabilitating and restoring hope to those hit by such circumstances and to them that were affected physically and emotionally as a result of the Lord’s Resistance Army (LRA) war. 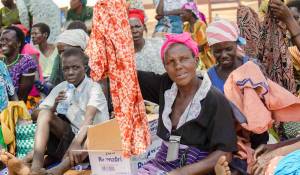 On average, every widow in Gulu looks after 8 to 10 children; with such high poverty levels. This remains a burden as they struggle to get the basic necessities of life like; safe water, food, quality medical treatment as well as better housing.

Being that a big part of the region is dry, the few available water sources are far away from the communities where people stay/live. Therefore children have to travel long distances on foot approximately 600 metres searching for water. These children normally return back home late which poses a great risk to their physical safety. In addition, most of the shelters in the area are grass-thatched; thus prone to catching fires during the scortching heat season. In cases of conflicts, these shelters easily burn; thus leaving many shelter-less.

HIV/AIDS epidemic is on high in this region, this is as a result of rape and defilement. With high illiteracy levels, this vice has spread widely in this area. In addition to this, cultural beliefs where women are allowed to remarry the brothers of their dead husbands; has contributed greatly to the spread of HIV infection.

Basing on the above challenges, Love Uganda Foundation realized that there is a great need to restore lives of many people living in Gulu, hence leading to the establishment of Gulu Elderly Project.

Recently, we held Gulu Charity Activity Mission; where we reached out to many vulnerable people in the communities of Paichor, Tegot. We conducted various restoration and empowerment programs/workshops accompanied with donating basic life materials. The elderly, war-affected victims, school going children, local leaders, all benefited from this Love Activity. Business skills, Improved crop cultivation techniques, Health Education/HIV-AIDS prevention, Godly character with an aim of equipping knowledge and skills on how to eradicate poverty and diseases among the people were all emphasized during these meetings. Among the basic materials donated were; soap, rice, flour, beans, clothes, shoes, basins, scholastic materials (pens, pencils, books, sets), girl-pads as a way to express our generosity to empowering Vulnerable Gulu communities.

Other missions carried out include reaching out to various communities within Kampala capital city. Many street children today are existing all over on the streets of Kampala city and many others living in the surburbs and slums within the city. It is our mandate as a team to reach out to them and empower each single one of them that our tomorrow as a nation may rely on such potential transformation leaders.