Proverbs 31:13 “She is always gathering wool and Flax and enjoys making things with her hands.”

Program Mission: To build economic independence as a tool to work their way out of poverty, care for their families and strengthen their communities.

Women and girls are classified among the vulnerable group. Their vulnerability is caused by factors such as unequal access to education, high poverty rates, unpaid domestic work, and persistent gender stereotypes among others. Women face challenges of poverty which is attributed to factors such as lack of power, material resources, Illiteracy, traditions, and norms that hinder their development. The norms and traditions in place are patriarchal in nature which gives more value to the male gender as compared to the female. When it comes to inheritance, oftentimes, properties are left out to males to the disadvantage of females.

This stretches to HIV/AIDS-affected households as recent studies reveal that about 30 percent of widows and orphans are victims of this practice following the death of a spouse/parent. It is a no surprise that only about 16 percent of Ugandan women own land in their own right withstanding the fact that the laws in place grant men and women equal rights to land and other property regardless of their marital status.

Most women especially in the rural areas are linked to the private sphere which is dominated by unpaid work such as the continuous responsibility over domestic work, for example caring for children and animals. Additionally, women also lack control over income sometimes even in cases when they provide the labor that generates the income as the men have taken over whenever it is at the point of harvesting or selling.

The fate of teenage mothers is an area of concern. These young mothers experience many physical, psychological, mental, and social challenges such as depression, drug, and alcohol abuse which at most times is caused by the absent and irresponsible fathers of the children and the scorching economy. Most of them drop out of school and are forced to face the harsh realities of life which come from transitioning from teenage hood to motherhood.

There is as well a gap when it comes to the aspect of inclusion of women in decision-making processes. Women are needed in representative positions to articulate the interests of fellow women. Most of the women eye local council and parliamentary elections due to gender stereotypes and the few that have eyed the Presidential elections have failed miserably regardless of the fact that most of the registered voters are female. Article 180(2), (b) provides that one-third of the membership of each local government council shall be reserved for women. As a result, in 2016, women made up 44% of Local Council Leaders. Despite the Affirmative Action that requires women’s representation per district, as of February 2021, 34.9% of seats in the Ugandan Parliament were held by women and the rest by men.

All the above inequities and inequalities are registered in the local communities of Uganda regardless of the 75% of legal frameworks in place that promote, enforce and monitor gender equality and equity under the SDG indicator. According to the 18th edition of the Uganda Economic Update (UEU), it notes that Uganda’s economic recovery will be faster, stronger, and more sustainable if it brings more women into the center of profitable economic activity and projects that the country’s economic growth to be between 3.5% and 4.0% in Financial Year 2022 and about 5.5% in Financial Year 2023.

It is against the above background that the Love Uganda foundation reaches out to women with the intention of empowering them for the challenges they face in the present time as well as preparing them for the future. Love Uganda Foundation`s Women empowerment program targets; teenage mothers, widows, and women infected with HIV & Orphan, Vulnerable, and street girl children.

The Foundation has a small center which it hopes to expand in the future if funds allow, to enable the program to help more nation mothers and girl children. This center is known as Love Women`s Center located in Kalagi where the women supported by the Foundation meet for their activities like art & craft, tailoring, and business mentorship.

The Women Empowerment program benefits 30 women in Mukono and 50 women in Gulu directly every year and the program runs twice a year. The beneficiaries of this program in Gulu do not have a center but deal in art, crafts, tailoring & business mentorship.

The program is open for individual, company, or organization partnerships. By joining hands we can go far. 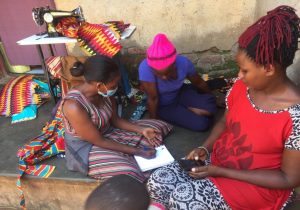 LUF intends to provide knowledge and skills that can make the vulnerable women within our outreach areas self-sustainable.

Under the capacity building program, Love Uganda Foundation intends to promote the capacity of the women
Donate Now