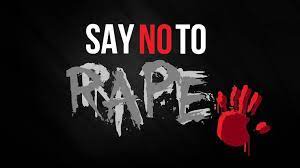 Rape is something that many people make fun of every day mostly men. They feel that in some way or the other they have won over the girl. Cases of rape in Uganda keep on rising day by day. Some are reported and some are not. Authorities are corrupted not to hear the cases so justice is not served for the victims. According to the annual crime report of the Uganda Police Force. It shows that 14,134 cases of defilement were reported in 2020.  Compared to 13,613 cases reported in 2019 giving an increase of 3.8%. Men, in the same way, are raped but they fear coming out to talk due to fear of how society will take it.

So many questions come into my mind we I hear stories of rape and defilement. I wonder what goes around their mind, after they have done whatever they wanted how do they feel, do they sleep comfortably at night and wake up happy, do they feel the guilt in any way. I end up not finding answers to my questions maybe you can help me out find answers.

The person who commits rape is liable to suffer death. Furthermore, any person who attempts to commit rape commits a felony and is liable to imprisonment for life with or without corporal punishment.

Comments about those being raped are not promising that any time soon the problem will be solved. Members of parliament in Uganda openly blamed the victims of rape but not the perpetrators.

Male Ugandan politicians, for example, the former youth minister Ronald Kibuule said.  “I have talked to the police to see that if the woman is raped they look at how she was dressed”. Most youths dress up indecently but that doesn’t mean they must be raped or sexually harassed. But somebody needs to talk to the boys and men out there. They have to learn how to control their ego and emotions. It’s very right to say that women should dress up properly. But that will not stop the boys/men from acting that way.

There was a proposed law to burn the miniskirt as part of Anti-Pornography Law in Uganda. This was by Simon Lokodo who was the Minister of State for Ethics and Integrity in 2014. But the parliament did not pass it. It was like blaming rape on improper clothing is blaming the victim for the crime.

Blaming the victim is saying women who dress in a way that attracts attention are responsible for what may happen to them. Some men and women ask questions like “why would you want to walk around with a miniskirt exposing your thighs?” miniskirts are legal in Uganda and a woman has the freedom of expression entitles her to decide what she wears.

The police in Uganda are investigating two cases of gang rape and defilement in Kabulasoke village in Kkingo Sub-county, Lwengo district. A group of youth on different occasions have defiled and raped girls in the area. The first victim of only 15 years of age was defiled on her way home from the wedding. Upon reaching the maize plantation she noticed that she was followed and decided to increase the speed. Immediately, she felt come chemicals being spread into her eyes and she could no longer see anything and her neck was tied. She could not tell how many were but they were more than one then she lost consciousness.

The second victim is also 15 years. She says that the Grandmother sent her away from home after delaying where she had gone. She had to deliver a holiday package to school. But after went to Father Bill’s church for evening prayers and reached home at 7 pm. Defiled by four men in the space of two days as she was looking for somewhere to sleep.

In the space of only two months, seven cases have been reported including where a four-year-old girl was raped. A position where suspects are arrested and later released puts the lives of the victims at risk. The law is supposed to protect women and girls against rape and sexual harassment. But with the police force not properly informed about the details of the law and other people (men) take the law into their hands. Ugandan women and girls cannot be safe.

the above two girls or even all the seven cases are likely to be affected with HIV/AIDS, Sexually Transmitted Diseases. And they are physiologically affected. This calls for united efforts to address the problem at hand. Today it’s the other person but tomorrow might be you or one of your closet people.

Love Uganda Foundation call upon everyone in all positions to condemn rape and create awareness to people. Advise the victims to report to the authorities and also provide guidance and counseling. Through donations and also sponsoring victims to school anything can help.